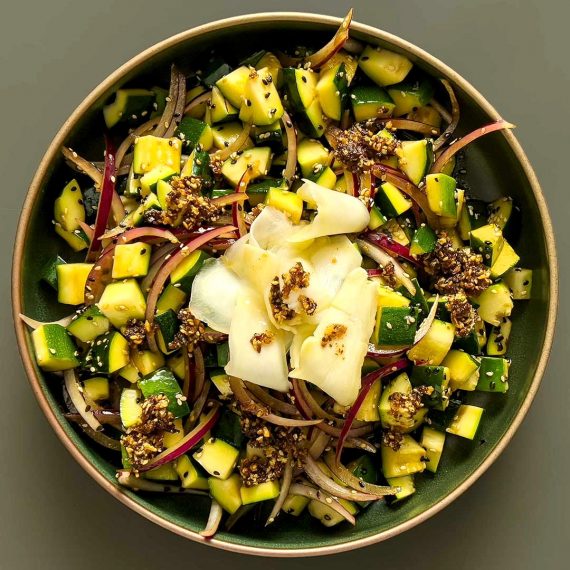 Now This is a Salad Worthy of Discussion.

Here is a salad that knocked me out.  As you’ve heard me say, salads do not take a back seat in my meals. They’re never an afterthought. In fact, there are many times when I decide on a particular salad and build my meal around it. When I’ve got such bright and complex flavors going on in my salad, simplicity is called for in the rest of the meal. In this case, crispy chicken thighs and white Japanese rice filled the bill.

Whenever I use zucchini in a salad I always scoop out the seeded centers. Those centers get mushy and release liquid into a salad, so they’ve gotta go. It only takes a couple of minutes and it’s very much worth it for the end result.

I don’t know if you’ve ever eaten the pickled ginger commonly served with sushi in any other context, but it’s so delicious I keep a jar on hand most of the time. In this case, it adds the perfect bright hit of flavor to the otherwise deeply flavored toasted sesame oil dressing.

The dressing is simply a mixture of toasted sesame oil, soy sauce, rice vinegar, olive oil, and sugar. But it packs a whole lot of flavor and mild zucchini is perfect for soaking up the lovely dressing.

A good friend, who happens to also be an exceptional cook, recently introduced me to a product that I immediately fell in love with. Knowing I’m a huge fan of chili crisp, he was right in thinking I’d flip for this. It’s called Saku Saku Crunchy Soy Sauce Flake by Kikkoman. There is no chile in it, hence no heat. Instead you get a heavy hit of crunchy soy, sesame, garlic, onion, etc. It’s fantastic and was perfect on this salad. It’s also great on plain white rice and many other things. As of right now, I can’t locate a local outlet that carries it. It’s only available online. I’m hoping that changes. But you could definitely use chili crisp instead.

As I was mixing the salad I decided sesame seeds were needed and added toasted white sesame seeds, as well as black sesame seeds. Nothing else was needed. This salad really does have it all.

Cubes of fresh zucchini are combined with sliced red onions, black and white sesame seeds, and a toasted sesame oil dressing. But that's not all. Crunchy soy sauce flake and pickled ginger turn this into an off the charts bowl of surprising flavors and textures. Nothing at all average about this salad.