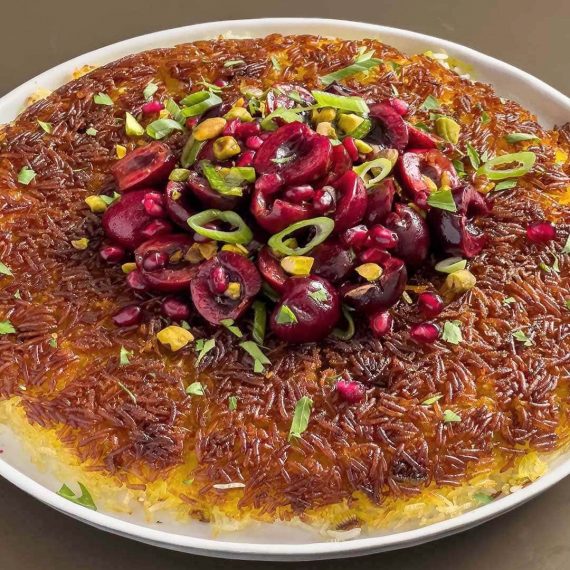 One of my all time favorite foods to eat is tahdig – rice cooked until a very crispy crust forms and it is then flipped out of the pan, which displays that beautiful crispy rice layer on top. I’ve been making Samin Nosrat’s recipe (Persian-Ish Rice) for years and have always been happy with the results. This time around I didn’t begin by deciding to make it. Instead I had an abundance of sweet Bing cherries and knew I wanted to make some sort of salad, using them as the main ingredient. As I kept thinking about which way to go with the salad, I mulled over combining them with cold rice, etc. And that’s when tahdig popped into my mind.

It all came together after that. I just knew that a salad with cherries, pomegranate arils, scallions, plenty of tart citrus juice and pomegranate molasses would perfectly complement the rice. There is no cultural authenticity to this recipe. It’s simply what I thought would taste good.

I changed up the original tahdig recipe by adding a few elements. Whereas a cup of the semi-cooked rice is normally mixed with a little yogurt and spread into the bottom of a skillet, I used heated heavy cream in which I steeped some saffron threads. I thought the saffron flavor would be particularly good with the cherry salad. I also added sliced scallions to the rice when it was cooked in the skillet.

I want to bring particular attention to one element of the rice recipe.  2 cups of basmati rice are initially cooked in 4 quarts of water to which a half cup of kosher salt has been added. Don’t let this amount of salt throw you. As Samin explains, this is your only shot at getting your rice seasoned. It only cooks for a few minutes to the al dente stage, so there is no chance of it being over salted. Don’t be afraid to add that amount of salt.

There are a couple of other things I think add to the success of the tahdig. You need to use a 10 inch skillet. Mine is ceramic coated and I’ve never had it stick. Before turning it out, drain off any residual oil. You won’t know it’s there until you tip the skillet. It’s important to drain it because you could end up with either a mess on your hands or you could burn yourself with the hot oil. At that point, take a deep breath and hope for the best as you flip it out of the skillet. As Samin says, if yours should stick, simply remove it in pieces, place it on a platter and do what Persian grannies have been doing forever, which is to pretend this is how you intended to serve it all along. No matter what, it will still be absolutely delicious.

What did I think of the end result of the cherry/tahdig combination? I was over the moon with how delicious it is. Seriously. I’m not overstating or exaggerating how much I love this. This is my kind of food and I hope it’s yours, too.

Tahdig - Irresistible crispy crusted rice. This time I topped it with a sweet/tart salad of fresh cherries, scallions, pomegranate arils, and pistachios. I used pomegranate molasses and calamansi juice in the dressing, but you could use lemon juice. I can't adequately describe how delicious this is.