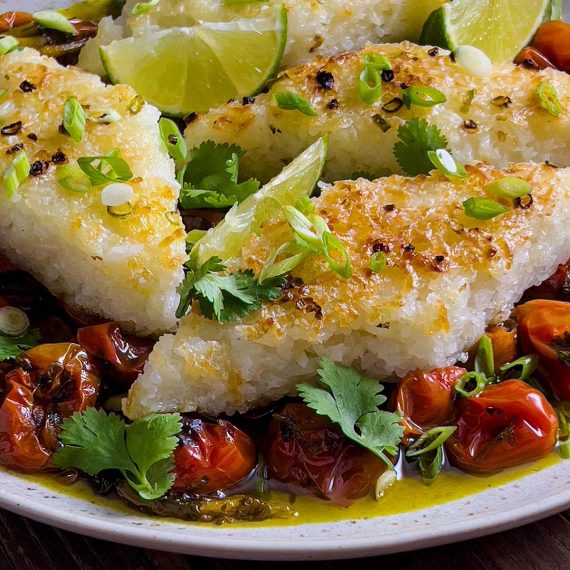 Crisp and Chewy Coconut Milk Rice Cakes are Out of This World Delicious.

Just imagine this. Sticky rice is baked in a mixture of coconut milk, fresh ginger, scallions, garlic, and salt, after soaking in water for an hour.

The tomatoes are roasted in another dish at the same time as the rice is cooked, so both pans go into the oven and are done at the same time. It’s a mostly hands off preparation. Besides turmeric, the tomatoes are cooked with more ginger and garlic, a little maple syrup, cilantro, cumin seeds, and olive oil.

After a half hour, the rice is done and the tomatoes have started to break down and char a little.

Before it’s served, the rice is put under the broiler to crisp it up and brown it. Then it’s cut into squares (or a kind of diamond shape as the case may be) and placed on top of the warm roasted tomatoes. This is another one of her combinations of flavors that is so unexpected and yet makes perfect sense. The spices and flavorings in the tomatoes blend exquisitely with those crispy rice cakes. A squeeze of lime juice is the perfect final touch.

Now, more about those rice cakes. We all have our weak spots where certain foods are concerned and rice is one of mine. Especially sticky rice. I could easily have eaten myself sick on these, but seeing as how Ixta mentioned that the leftover rice cakes are great pan fried in a little oil until crispy, I held back.

Those leftover pan fried rice cakes may be one of the best things I’ve ever eaten. I mean, come on! Super crispy on the outside and soft and chewy on the inside is perhaps one of my favorite descriptions in all of the food world. Those textures are number one in my book. Combined with the subtle flavors of coconut milk, ginger, garlic, and scallions, and you’re now talking about something that’s swoon worthy. And while the tomatoes are indeed scrumptious, the rice cakes would be worth making on their own without the accompanying tomatoes if the mood should strike.

Here is a link to Ixta’s fabulous recipe: