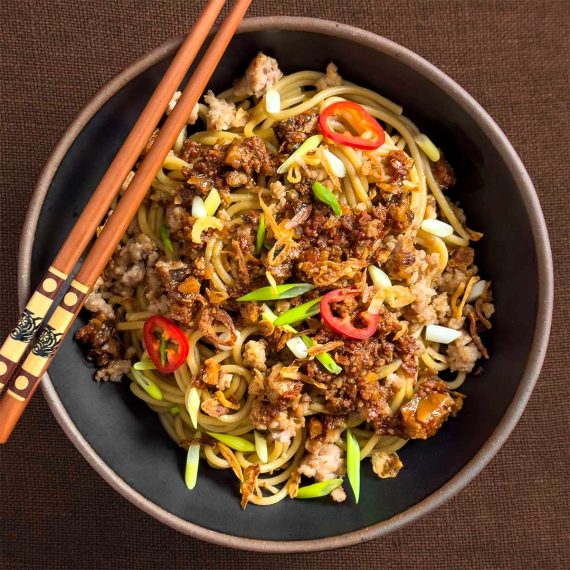 Now Here is a Bowl of Noodles I Fully Support.

Kenji Lopez is a favorite of mine and I came upon a recipe for his take on XO sauce in his new cookbook The Wok*. He calls it Umami Sauce because it doesn’t have the requisite dried scallops and shrimps, called for in typical XO sauce.

Instead he uses ingredients that are easily found in our grocery stores – minced pepperoni and bacon for some of the deep umami flavors. After cooking these in oil until they’re nicely browned and crisp, a bunch of other ingredients are added. Reconstituted dried mushrooms, garlic, shallots, ginger, anchovies, Shaoxing wine*, chicken stock, gochugaru*, bay leaves, star anise, fish sauce, soy sauce, and oyster sauce are then stirred into the pot.

These are cooked until all the liquid has evaporated and you’re left with a thick jam-like sauce covered in flavor packed oil. And it is sensational.

I had to have a bowl of noodles to go with this and decided to cook up some ground pork to go in the noodle bowl. I simply browned the pork in a little oil, added soy sauce and called it done.

Now, here’s something else I learned from Kenji. He describes a technique for turning dried spaghetti into surprisingly good Chinese noodles. By adding 2 teaspoons of baking soda (plus salt) for every liter of water used for boiling the pasta, the spaghetti transforms into springy and chewy noodles with a flavor much closer to Chinese noodles than dried pasta. Are these noodles as good as fresh Chinese noodles? No, of course not. But they’re pretty darned good and if I don’t have fresh Chinese noodles on hand I will be using this technique.

I topped each bowl of noodles with some pork, a couple tablespoons of the Umami Sauce, a little soy sauce and a splash of black (Chinkiang) vinegar*. I then garnished it with a few slices of chili, sliced scallions and crispy fried shallots*.  So delicious!

*Disclosure: I only recommend products I use myself and all opinions expressed here are my own. This post may contain affiliate links that, at no additional cost to you, may pay me a small commission and help support the costs of this website. Read full privacy policy here.

A bowl of noodles with ground pork and J.Kenji Lopez-Alt's recipe for Umami Sauce. Topped with crispy shallots, scallions and a few sliced chilies, this is really hard to beat. Plus, get a load of this technique for cooking dried spaghetti which turns it into springy and chewy Chinese-type noodles.