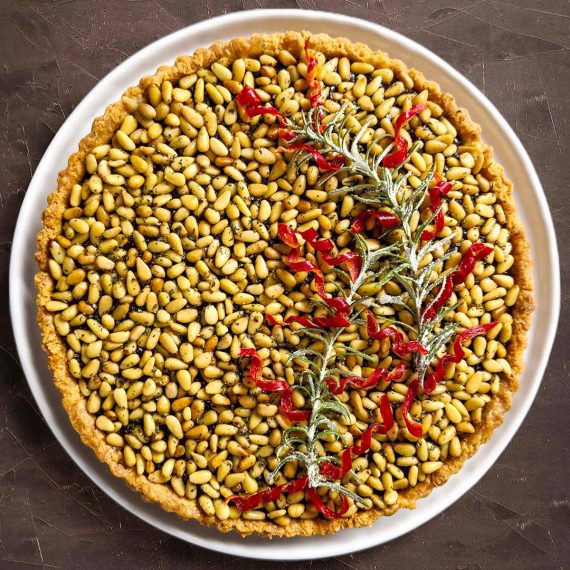 It’s that time of year. Time to break out some special desserts and dress them up for the season. While it tastes decadent, there’s hardly an easier dessert than a tart shell filled with silky chocolate ganache. Nothing wrong with that at all. But I wanted more.

Starting with the ganache, I added a little chipotle chili powder to the cream – enough to keep it interesting, but subtle. Plenty of vanilla rounded out the flavor nicely.

As far as the pastry goes, there are many that would work here. I used my own all butter pie dough, but David Lebovitz’s French Tart Crust is a very easy press in crust and it would be excellent in this tart. A short crust would also be splendid. Use your favorite.

After filling the shell with the chili infused ganache, I topped it with a full cup of pine nuts I had roasted in a little olive oil, salt and finely minced rosemary. Wanting more rosemary flavor, I rubbed some additional minced rosemary with a little salt, sprinkled it over the tart and that did the trick. By rubbing the salt into the leaves, they released all their fragrant oils and added the perfect amount of rosemary flavor to the overall tart.

Now for the ‘dressing up’ fun part. I originally thought some sugared rosemary sprigs would be pretty for garnishing the tart, but then I ran into a recipe for candied strips of fresh chilies that are then rolled up onto a wooden skewer and put in a very low oven to dry out and crisp up. I thought they’d be fun partnered with the rosemary. You could use several chilies, but I only needed one. After simmering the chili strips in simple syrup, you are instructed to wrap them around wooden skewers. I found it was necessary to oil the skewers first or the chilies would have stuck to them. I also thought it was unwieldy to use long skewers because as soon as you finished one strip and started winding the next, the first strip would start to unwind. So, after the first one, I broke my skewers into pieces and used one per chili strip.

I put them in my counter top oven for the recommended hour at 190° and they were still very soft. It ended up taking close to 2 hours for them to fully dry out. They were then easily removed from the skewers and left to cool. They’re not only pretty and festive, but also really delicious.

Now my tart was all dressed up and ready for the holidays. By the way, a little whipped cream served on the side is not a bad idea either.

Silky chili infused chocolate ganache fills this all butter crust. It's then topped with roasted salted pine nuts and rosemary. Then candied chilies are added to the top, along with sugared rosemary. All dressed up for the holidays!