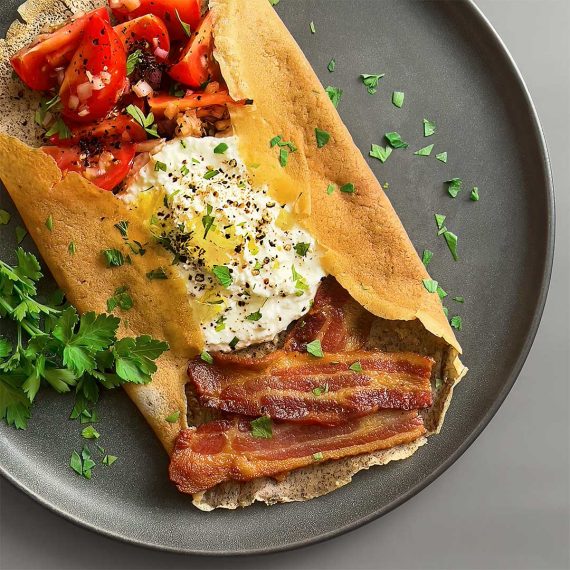 This is so Delicious, I Repeated it Again a Few Nights Later.

Well, as promised, here’s one of the things I did with my homemade ricotta. I had just received a shipment of my favorite bacon – Hickory Smoked Country Bacon from Benton’s Country Ham. If you’ve never tried it, I highly recommend you do so. Several years ago I kept hearing different chef’s mention this bacon, so I had to try it and it made me a believer. It’s my favorite of any bacon I’ve ever tasted.

I had been wanting to make the big buckwheat crepes, known as galettes in France, ever since eating them when I was there and decided now was the time. After looking at a bunch of recipes I decided to make David Lebovitz’s recipe and they turned out perfectly. I whizzed the batter up in a blender and let it sit overnight.

The only thing I did differently was to make them larger. I used a 12 inch non-stick skillet for mine. I will include a link to his recipe. You can make them earlier in the day or even a day or two ahead of time and freeze them in the portions you will need for serving. They thaw very quickly at room temperature and taste just as good as they did the day they were made.

After that it was simply a matter of making a tomato salad and frying up the bacon. I added minced shallot, pomegranate molasses, urfa biber, a tiny bit of Worcestershire sauce, olive oil, and salt and pepper to some sliced Campari tomatoes.

I then spread a quarter cup of ricotta on the center of each crepe, topped it with freshly grated lemon zest and black pepper, added a scoop of the tomato salad, a few slices of bacon, and sprinkled parsley on everything.

I don’t think this could have been more delicious. We liked it so much, I repeated it again a few nights later. It’s a BLT on steroids.