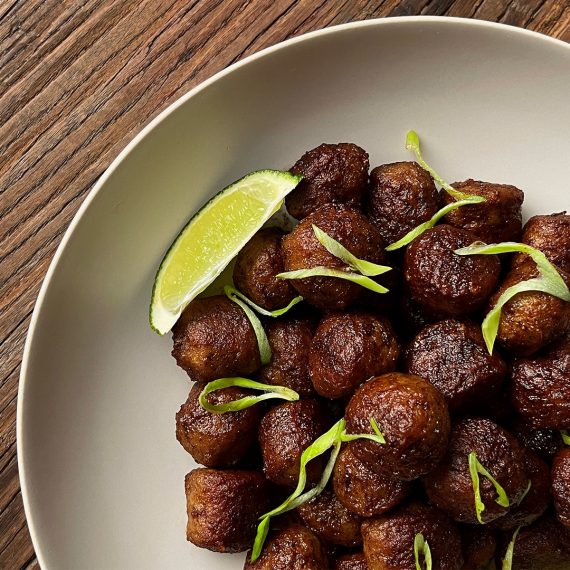 I had a surprise occurrence in my grocery delivery order. I received four bags of frozen beef meatballs which I did not order. When I called to report it, I was told to keep the meatballs, free of charge. This has become almost a game for me. What can I do with these? I’ve already cooked them with pasta and tomato sauce and tossed them into a Vietnamese type soup.

This time around, I was thinking about how much I love the simple combination of soy sauce/butter, and decided to go with it. I started by browning the thawed meatballs in a little butter. I removed them from the skillet and added some butter to the hot pan. After it had browned nicely I poured in soy sauce. It bubbled ferociously and I removed it from the heat. After adding the meatballs back into the pan and stirring them around, they essentially absorbed most of that glorious browned butter and soy mixture.

I knew a squeeze of lime juice would be good on them and some sliced scallions added a nice acid punch. This is my family’s favorite take on the meatballs, so far. They’re juicy and the soy butter sauce is so much more than the sum of its parts. Even after the meatballs are all finally used up, I will make this again with homemade meatballs. But all in all, I’ve had fun coming up with ways to use my unexpected delivery.

Thaw a bag of frozen meatballs, cook them up in butter and soy sauce, squeeze on some fresh lime juice, and garnish with sliced scallion. Voila! A fabulous main course in 15 minutes.