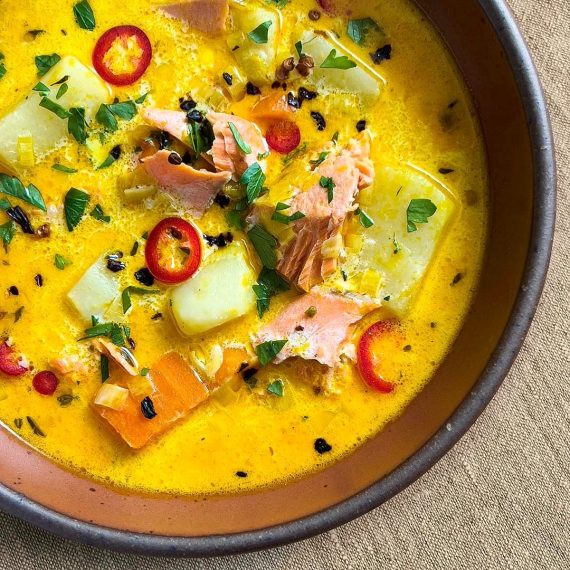 A creamy fish soup with a difference.

I’m a fan of all good fish soups/chowders. From the tomato based to the cream based I’m all in. I had originally intended to make a very simple, but favorite salmon soup, which is the Finnish version, and consists of only salmon, potatoes, onions or leeks, carrots, fish stock, cream, and dill. It’s delicious. But before I started cooking I got to thinking about making a version with sustainably sourced unrefined red palm oil. I’ve only recently started cooking with this west African ingredient, but have quickly grown to love it.

Besides the beautiful color, it has an earthy, mildly sweet and nutty flavor that I thought would lend itself very well to my fish soup. I also wanted the flavor of butter, so I started out by cooking my sliced leeks in equal parts red palm oil and butter. After that it was only a matter of adding spices and flavorings that would compliment the fish and red palm oil. I chose to add some ground cubeb, but I realize this spice isn’t commonly found in everyone’s kitchens, and the soup would still be good without it.

I thought some chili would be good and added chipotle chili flakes and a little sliced Fresno chili, as well. One of my newer spice obsessions is long pepper and I knew it would be great in this. I’ve been so happy with this spice. Its flavor is peppery, but also has hints of warm spices, such as nutmeg, etc. I’m so surprised at how versatile it is and am using it in many of my dishes these days.

I cut up the carrots and potatoes in large chunks. I wanted to be able to actually taste the vegetables themselves and didn’t want to lose their flavor and texture by cutting them into small pieces and having them essentially meld into the soup. After adding the spices, vegetables and stock to the pot, it only took about 15 minutes of simmering for the soup to be ready for poaching the salmon.

I added the salmon and cream at the same time and gently poached it for 3 or 4 minutes and it was done. After breaking up the salmon into chunks, I tasted the soup and it was flat. I happened to have a lime, so I squeezed in the juice from the entire lime and now the soup was really good.  A little parsley, sliced chili, and some additional chipotle flakes finished it off. What a delicious combination this turned out to be.

Creamy and mildly spicy, this soup is brimming with flavor. Red palm oil adds the perfect nuanced flavor, along with long pepper, dried and fresh chilies, and lime juice. The salmon is gently poached in the creamy base. Leeks, carrots and potatoes all combine for an extremely delicious and soul satisfying soup.