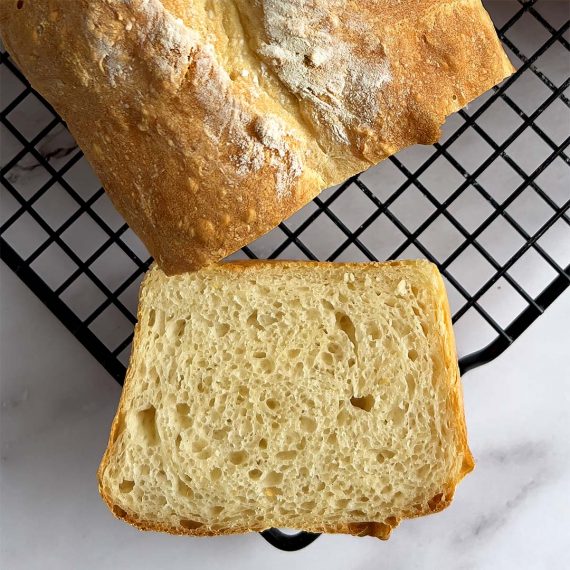 One of the Easiest Breads You Could Ever Bake.

I love good bread and bake all kinds. From French baguettes, to Japanese milk breads, to focaccia: You name it and I bake it. The only bread I don’t bake is sourdough. I love it, too, but I’ve never been interested in maintaining a starter. I like a diversity of breads and wouldn’t use the starter often enough to deal with sustaining it.

But there is one bread I bake most often and this is it. The title has always struck me as inappropriate – No-Knead Sandwich Bread. If I specifically want sandwich bread, I’ll bake a pullman loaf or something similar. This bread is more open crumbed and crusty than what I would typically think of as being bread for a sandwich. I eat this bread in a myriad of ways. For instance, I wouldn’t consider using any other bread for a panzanella. This one is simply perfect. And when it comes to toast, this bread has no rivals. The crust gets really crisp when toasted and it’s substantial enough to hold whatever filling you could want.

Why is this particular recipe the one I most often bake? There are several reasons. The most important is how great it tastes, but there are other reasons in play here. It may be the simplest to make of all the breads I bake. Stir all the ingredients in a big bowl. Cover and let it rise for 4 to 5 hours. Divide it in half, pat out the dough, scoop it into bread pans, let it rise again, slash the top, bake it and you’re done. You can put the dough in the refrigerator after the first rise and bake it at your discretion over the course of a couple weeks. I’ve never done that. I usually bake both loaves in the afternoon of the same day it rises and freeze whatever we don’t eat on that first day. It stays perfectly fresh in the freezer. If you’re a first time bread baker, this would be a great place to start.

I do have a tip regarding mixing the dough. I very rarely advocate for a single use kitchen tool, but a dough whisk is one of my favorite gadgets and it makes mixing a large amount of dough extremely easy. It is so much easier than trying to stir a large amount of batter with a spoon. I use it for all my hand mixed batters. Besides its inherent usefulness, it also cleans up very easily. Dough doesn’t stick in the grooves. A simple rinse and a little soap and water is all it takes.

While I adhere to the basic ingredients in the recipe, I’ve tweaked it over the years and always add 3 tablespoons sugar and 1/2 teaspoon citric acid powder. I think the sugar and citric acid provide a more complex flavor. Neither are necessary, but that’s how I make it. Pay attention to the salt called for in the recipe. I advise you to use the weight measurement vs. the volume. I’ve discovered that the author obviously used Diamond Crystal kosher salt, as the specified amount of Morton’s kosher salt weighs much more than stated in the recipe. If you don’t have a scale and are using Morton’s kosher salt, cut the amount called for in the recipe in half. You can also switch out some of the all purpose flour for whole wheat, rye, etc. And here’s another reason I love this bread. When the pandemic was in full swing and flour was in short supply, on several occasions I found myself with only all purpose flour or only bread flour. I made this bread using only all purpose or bread flour and it always turned out well. I’m convinced you can’t hurt this recipe.

The recipe instructs you to remove half the risen dough, place it on a lightly floured surface and knead lightly 3 or 4 times. I don’t do this. I use a bowl scraper to punch down the risen dough in the bowl. I then fold the dough over on top of itself 3 or 4 times and call it done.

Another thing I want to mention is that in the directions, you are instructed to pat the dough out on a lightly floured surface, fold one side into the center, repeat with the other side and place it in the bread pan, seam side down. These are very common directions for making bread. But in this case, you are dealing with a loose and wet dough. Folding and lifting it isn’t accomplished very neatly. Do not worry about it at all. I use a bench scraper to lift the dough from my counter into the bread pan and it works fine. My son has made this bread on occasion and he barely bothers with the patting and folding. He simply plops the dough into the bread pans and it still turns out just fine.

I will be using this bread in a couple recipes this week, which I will be posting. I wanted to share this recipe in advance so you would have an idea of the kind of bread I use in those recipes. Enjoy!

Here is the link to the recipe: